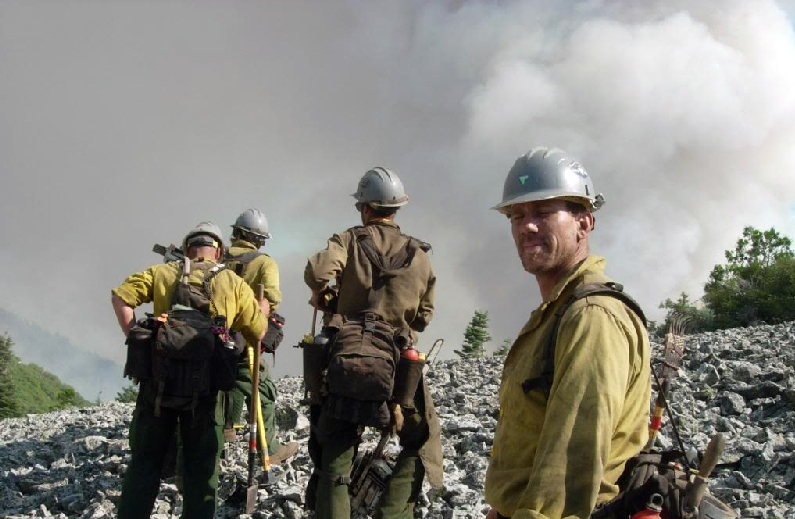 The Diamond Mountain Interagency Hotshots are a highly respected, conditioned, and professional national all-risk management resource. We strive to maintain the highest standards for training, work ethic, and fireline effectiveness. Through communication, motivation, and a commitment to the standards and traditions set by earlier hotshots, the crew will continually work to maintain a level of excellence in all situations

Diamond Mountain IHC is a National resource and will typically travel to multiple geographic areas during a normal fire season. The crew safely and effectively performs all aspects of wildland fire management and strives to provide the best service possible. The primary mission for DMIHC is to support, develop, and implement efficient and safe strategies and tactics for all wild land fire operations. When not assigned to wildland fire incidents, the crew will perform fuels project work, such as prescribed fire prep and implementation, juniper thinning for sage grouse habit and hazard fuels reduction.

Diamond Mountain IHC is stationed out of the Hidden Valley Fire Facility at 1709 HWY 139, in Susanville, CA. The crew has its own station and compound, which includes offices for the crew overhead, bays for the vehicles, a training room, and a gym. We have limited crew housing available if needed.

DMIHC strives to always provide each employee with the training to move into their next position. Training is one of the highest priorities of the crew. We take an extensive look at the employees’ individual development plan and we will facilitate as many Suppression (S-courses) and leadership (L-courses) series classes we can in a season to help our employees achieve their next position. We believe in scenario-based training and hands on in the field training. We limit our time in a class and perform classes in the field when possible.

16 hours or more can be expected while on a fire assignment. Lodging generally consists of a tent and sleeping bag. Meals will either be MRE’s or Hot meals provided by the incident. Hot, smoky, dusty, wet, rainy, and cold conditions can generally be expected throughout the season.

When not assigned to incidents or is on an assignment, we start work at 0930 and end our day 1800. We will perform daily PT and readiness for fire assignment will be ensured before any training project work. Our basic work we is Wednesday through Monday, with Tuesdays and Wednesdays off.

When applying, be sure to check the Susanville, CA as the duty location in order to be considered for Diamond Mountain IHC.

DMIHC is a hiking crew. MO is our PT hill. 2000’ vertical in 1.75 miles. You should be able to complete this hike in under 60 minutes in full gear under any environmental condition present on the day of the hike.

While hiking is our foundation for PT – we do implement a cross training schedule once success on the hill has been achieved. We believe that mobility and strength with a strong endurance base will help you be successful and safe on the fire line.

The Diamond Mountain Hotshots were born in the spring of 1992 under the guise of increasing the Bureau of Land Management’s commitment to contribute resources to national fire suppression. The crew was the second BLM hotshot crew in California and the fifth crew in the nation. The Diamond Mountain Range west of Susanville lends its name to the crew as its rocky crests provide a constant visual reminder and keeps a watchful eye upon the high desert.

The original 1992 crew spawned from Crew 3221, the Initial Attack Dawgs, a 10-person initial attack crew that worked in and around Susanville in 1990 and 1991. Mike Minton was offered a JATC position in the spring of 1992 and became the first official hire of the “soon to be” hotshot crew. Minton was joined by an unlikely cast of characters for the 1992 season including Mike Bowles, who was hired as the first superintendent, and Kevin Chambers who was selected as the foreman. The 1992 crew was supervised by the Northern California regional fire staff in Susanville. The 1992 season saw many growing pains as they aspired to become a well-respected crew in a region well-known for its hotshot crews. The crew responded to twenty incidents in a busy ‘92 fire season including the 68,000-acre Fountain Fire in Shasta County. Extracurricular events during the Cleveland Fire in late September led to a change in supervision for the crew for the 1993 season.

Kurt La Rue was hired as the new Superintendent in the fall of 1992 and reported soon thereafter, with supervision of the crew being shifted to the present-day Eagle Lake Field Office in Susanville. Kurt brought many years of hotshot experience to his new crew after a long stint on the Stanislaus Hotshots and others. Kurt retained Chambers as a foreman and added Ken Henson as the second. A new image was forged along with many new faces for the 1993 season, many of whom became mainstays within the crew and contributed much to the present day success and reputation of the crew including Keith Barker, Robert Holt, and Edward Merrill. 1993 also saw rise to ‘MO’, the PT hill still utilized by the crew to this day. The crew completed a successful 1993 fire season and built a formable foundation by which to continue. Twenty years later, the crew continues to deliver a quality product and achieve success following the ideals and beliefs of our earlier years.

The first crew logo was designed by Minton, and like much of the 1992 crew, only lasted one season. A new logo and a new crew color were ready for the 1993 season but failed to meet the approval of the new superintendent. 1994 finally saw a logo very much similar to the logo of today. Minton was again responsible for this logo and it was printed upon dark charcoal shirts which also remain in 2007. The logo was modified in 1995 with the adding of the “old English” script. The last modification to the Diamond Mountain logo was made in 1999 by adding “Malum Necessarium.”

The original crew utilized a make-shift station in the BLM yard until they finally found a home in 1995 and moved into the old Caltrans building on Main Street in Susanville. It was a suitable facility and the crew called it home until 2003 when Caltrans decided to put the building up for sale, thus ending one of the greatest lease deals in history at $200.00 a month. After a tiresome search, Superintendent Merrill finally secured a new home south of Susanville near the airport in the Turner Complex, the new facility offered a few upgrades with indoor plumbing and heating and an actual office space. 2004 again saw the crew move supervision, moving back to working under the fire staff of NORCAL BLM. The crew moved to their new and current home, The Hidden Valley Fire Facility, lying within the shadow of 'MO', in August 2009.

Crew transportation was originally comprised of a mismatched fleet of GSA vehicles that finally left for good after the 1995 season. Borrowed, green, Forest Service crew hauls found their way to Susanville from the Tahoe and Stanislaus for the 1994 season. The crew quietly converted them to BLM vehicles by applying our trademark, magnetic, logo to the doors. The crew took delivery of their new yellow crew hauls in 1996 and continually modified them until they were replaced in 2003 by shiny new buggies. The old buggies were unique with their ergonomically designed windows, rear suicide door, and cleverly mounted exhaust. The exhaust won acclaim from ground support personnel across the west as the crew attempted to demob incidents.