For reliable operation with repeater voiceboards and RAWS stations, configure radios with the following DTMF settings:

These settings result in a DTMF deviation of approximately 1.5KHz which has been found to give the most reliable performance.

It is recommended to avoid cloning between KNG/KNG2 and DPH radios because of the following cloning issues until a fix is identified. BK is aware of the issues and working on a solution.

2. When cloning from KNG/KNG2 P150 to DPHx5102x transmit power on the target DPH gets locked to low power instead of being selectable.

3. When cloning from DPHx5102x to KNG2 transmit power on the target KNG/KNG2 radio gets locked to high instead of being selectable.

Firmware and software used to replicate:

Cloning Between Legacy and KNG Radios

Follow the link for instructions for cloning between legacy and KNG radios. Contact Bill Forsyth for more information.

Due to airline shipping weight restrictions, the 4312's and 4370's will be shipped as 2 separate kits each. When ordering a 4312 and/or a 4370 you must also order a 004100 Mountain Top Accessory Kit. The 4312 and 4370 fiberglass boxes will continue to house the radio equipment while the 004100 Mountain Top Accessory Kits will contain the accessories used to install the radio equipment. These two boxes must be kept together at all times. It is recommended to leave the 004100 on the mountain top with 4312 and/or 4370 when they are deployed.

How to Check Battery Voltage on Repeaters and Aircraft Links

DOI and USDA WO Frequency Managers are now requiring the CDO to submit NTIA Interference Reports for all radio interference issues that adversely impact incident communications.

Radio interference must be reported to NIFC CDO (or COMC when assigned. Minimum reporting information: location, radio frequency, time and date (including interference duration), and sound or intelligent audio source for interference.

By this Public Notice, the Public Safety and Homeland Security Bureau (Bureau) announces a streamlined procedure for the Commission to authorize non-federal public safety entities to use the forty channels that the National Telecommunications and Information Administration (NTIA) has designated for interoperability.

This will mean that some of the repeaters used by the NIRSC to support project fires and All-Risk Incidents C8 - C17 and L8 - L14 (Federal Interoperability Channels) may be subject to interference. It is our understanding that if non-federal public safety entities who cause interference when identified have 24 hours to shut down.

The FCC has offered to train the NIICD staff on how to use their portable direction finding equipment to track down any interference issues on project fires.

TWO-WAY VHF/UHF RADIOS MAY NOT BE IMPORTED, ADVERTISED, OR SOLD IN THE UNITED STATES UNLESS THEY COMPLY WITH THE COMMISSION’S RULES
OPERATORS MUST ALSO COMPLY WITH FCC RULES
"The Enforcement Bureau (Bureau) of the Federal Communications Commission (FCC) has observed that a growing number of conventional retailers and websites advertise and sell low-cost, two-way VHF/UHF radios that do not comply with the FCC's rules. Such devices are used primarily for short-distance, two-way voice communications and are frequently imported into the United States.

Many of these radios violate one or more FCC technical requirements. For example, some can be modified to transmit on public safety and other land mobile channels for which they are not authorized, while others are capable of prohibited wideband operations. Such radios are illegal, and many have the potential to negatively affect public safety, aviation, and other operations by Federal, state, and local agencies, as well as private users. Because these devices must be, but have not been, authorized by the FCC, the devices may not be imported into the United States, retailers may not advertise or sell them, and no one may use them."

There have been reports of IMT's purchasing and using these types of radios (Wouxun and Baofeng) for inter-team communications. Theses radios are very cheap, are field programmable and operate on the same frequency bands used by the federal government both VHF and UHF. Teams must discontinue the use of these radios even in camp.

Violators may be subject to substantial monetary penalties.

All NIRSC equipment has been reprogrammed to meet the National Telecommunications and Information Administrations (NTIA) 2019 requirements.

DO NOT use old frequency pocket cards written prior to 2018.

All 2018 NIICD frequency schemes for NFES 004381 and 004244 radios have the official markings "Controlled Unclassified Information//Basic" and must be stored and disseminated accordingly. They may be sent to interagency email addresses but not to non-official emails (i.e. Gmail or AOL email accounts). COML or COMT personnel should contact their GACC for the new frequencies. The GACC can then inform them how to access their secure site to obtain this information, or they may send it to a government email account.

This information will also be stored on the NIFC FPT site under the radio_management folder 2018 frequency information. Access to this folder will require a NAP user name and password. The NIFC CDO Coordinator (Kim Albracht) and several others in the NIICD  will be able to grant access to this folder on the FTP site. This can be done with an email to request access. Once the email is received the personnel granting permission will inform the individual requesting access the steps that have to be taken to be granted access.

Refer to the NIRSC User's Guide for setup and installation guidance

New bulkhead connectors have been installed on the above equipment to provide a weatherproof interface with the internal equipment and the external cables. This will reduce moisture and condensation within the kit boxes.

Voice Boards are now installed in all of the above kits. When using a solar panel this board allows the user to remotely query the equipment to obtain battery voltage and equipment temperature.

A removable cover is installed on all alkaline batteries in the above kits to prevent the terminals from being shorted. DO NOT dispose of these covers, return with kit.

The Command Repeater (004312) kits will now ship in 2 boxes due to shipping weight restrictions. This second box is identical to the second box that comes with an Aircraft Link (004370).

All internal power connectors (Jones Plug and Socket) have been replaced with Anderson Power Pole connectors (PP1545). These new connectors are also in the Remote Kits (004330).

All NIRSC RF cables now use "N" connectors. The NIRSC no longer uses any UHF RF cables. Any NIRSC antenna or component manufactured with a UHF connector has had an N adapter permanently attached to that UHF connector.

The purpose of this memo is to provide information about new requirements for radio frequency distribution. It also serves to inform the community of the misprinted Air Tanker Base Directory and corrective action taken.

All documents that contain frequencies must be labeled at the top and bottom of each page with a disclaimer that says, Controlled Unclassified Information//Basic. Steps are being taken to update I-Suite to meet these requirements in the future. Additionally, work is being completed to edit any ICS forms hosted by NWCG while also coordinating with DHS/FEMA and FireScope. Any locally/personally controlled versions of ICS documents that you may have, that contain frequency information, must also display this disclaimer at the top and bottom of each page.

Errors were found in the Air Tanker Base Directory printed May 2017. This issue has been corrected and the directory is being republished. Please ensure that the version dated "June 2017" is used. The corrected electronic version is currently on the NIFC FTP site as well as secure password protected sites at various GACCs. All versions now contain the Controlled Unclassified Information label.

Relm/BK will no longer support four older models of radios due to these radios reaching the end of their life cycle. These radios are: DPH5102X, GPH5102X, GMP5992X and GPH5992R. These four radio types will still be accepted as Fire Approved. Contact Kent Gale for more information. See the attached information from Relm/BK.

Some DPH/DPHx radios that are behaving strangely may have corrupted programming. The corruption comes from being cloned from a GPH or DPH that has Auxiliary Group programming. See the following document. Contact Kim McCutchan for further questions. (7/2014)

In November 2012, the Federal Aviation Administration (FAA) finalized the "Coordination Procedures for Aeronautical Frequencies to Support Emergency Firefighting Requirements" document. This document is an agreement between the FAA's Spectrum Engineering Group and the National Interagency Fire Center, National Interagency Incident Communications Division's Communications Duty Office. It identifies the requirements and procedures for requesting Air-to-Air AM (Victor) frequencies in the support of wildland project fires and all risk incidents. Read the document here. Contact Kim Albracht for further questions.(3/2013)

Bad Batteries? Bad Clamshells? What to look for.

Here is something you can check if you ever run into the situation where you load brand new AA batteries into a clamshell battery holder and attach it to a radio only to find that the radio will not power up.
Clamshell battery holders are designed so that in the event that a AA battery is placed backwards into the holder no electrical connection is made. This is accomplished by a molded plastic shoulder placed on each side of the positive spring-steel contact in the clamshell holder. These shoulders extend beyond the positive spring-steel contact of the holder (see diagram below) which will allow only the positive post of the AA battery to make electrical connection. The negative side of the AA battery is flat so the shoulders of the clamshell holder will prevent an electrical connection when a battery is placed backwards.

The ANSI tolerances for the physical dimensions of the AA battery are broad and we have found some positive battery posts are just short enough as to not make connection with the spring-steel contact even though the battery still meets the standards. To correct the problem you can take a small screwdriver and with the batteries removed, bend the positive spring-steel contact further away from the clamshell holder body but not beyond the molded plastic shoulders in order to reestablish electrical connection. For further information, contact Bob Dukart. (5/12) 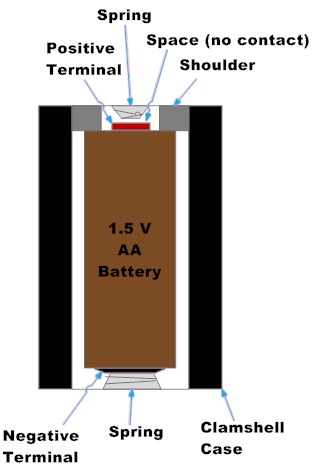 All kits containing handheld radios, except Relm BK kits, will be shipped with pocket radio use guides. Contact Mike Tuominen for more information. (2/12)

Family Radio Service (FRS) communications equipment shall not be used by anyone associated with federal wildland fire incidents or in instances that safeguard human life or property. This applies to agency, military, and contractor personnel. NTIA Manual, section 7.5.8, states: “federal entities may not purchase and operate FRS radios for planned communications operations that safeguard human life or property”. Additionally, the Departments of Agriculture and Interior have policies limiting the use of FRS radios.

There is a viable option called Intra-Squad Radio (ISR). These radios are used by the United States Marine Corps (USMC) for tactical communications and the NIICD has been given authorization to operate on the frequencies. For those personnel and crews who may have been operating with FRS radios and wish to utilize ISR, please contact the Communications Duty Officer (CDO) or Mike Tuominen for more information. (4/20/09)

See Incident Radio System Diagram PDFs to be used in the design and organization of an incident's communication system. (2/12)

Under the authority of the National Telecommunications and Information Administration (NTIA), the DOI and USDA have designated specific frequencies nationwide for assignment and use by NIFC to support their all-risk management missions. The radio frequency assignments are Freedom of Information Act (FOIA) release-exempt and are to be protected as "Sensitive Data."

If you have any questions concerning the above, feel free to contact the Communications Duty Officer (CDO) or Mike Tuominen

Most radios display the radio's operating software version when the radio is first turned on.

Contact your local radio technician to update your radio's software.